This is an outfit worn not long ago and I just haven’t had chance to post until now!

I absolutely loved the idea of combining a plain, loose tee with a full, knee length skirt for ages-this pink gingham piece is actually from Primark (yes, I found it discounted on Ebay..). Actually, come to think of it, everything I’m wearing here is from my Primark, jewels and all!

Now, I’m all for the funny and quirky slogans emblazoned across tees and sweatshirts, but recently I’ve been loving the more motivational, thought provoking messages, too. Not only are they a little more sophisticated than the usual phrases we’re seeing (although I love these, as well) but I love how versatile they are dressed up or dressed more casually.

Here are a few of my faves 🙂

Australian designer Gail Sorronda kicked off the second day of Australian Fashion Week with a collection, aptly named ‘Mermaids Exist’, that boasted collaborations with both Disney and Queensland Ballet for a Little Mermaid inspired collection. Unlike other ‘Under the Sea’ inspired collections ( see Kenzo, for example) there was a softer approach at this show-with light tulle and sheer materials, we saw elegance and femininity. This isn’t to say that there weren’t lots of obvious hints towards The Little Mermaid though, because we were given skirt shapes that gave the illusion of fishtails, glistening sequin detailing for a glamorous hint towards scales and an even bigger hint was the cartoon print of Ariel, Sebastian and lots of other sea life across the blank canvas of an all white outfit . Not only did we see light, neutral creams and whites, but Sorronda cleverly incorporated lobster red hues and a bright turquoises that were all reminiscent of The Little Mermaid story we know and love! Even accessories were on point, from jewellery that resembled coral, sea weed and driftwood, to structured crown detailing!

I definitely ❤ this collection-who knew mixing Disney and Fashion could come off so well?

As soon as I saw these words grace the catwalks of Moschino I prepared myself for an onset of not only slogan tees, but slogan everything, across the high street for SS14! I’m thinking that the likes of Topshop, Zara and ASOS will all climb aboard this cheeky slogan trend pretty shortly, but it looks as though they’ve already started seeping into their collections… 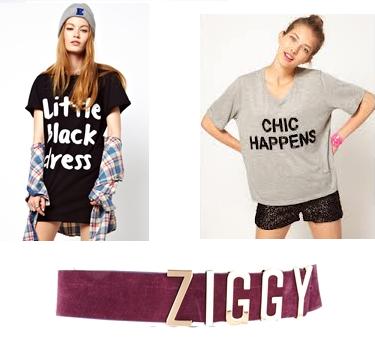